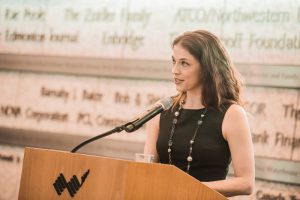 When a client approaches you about hosting an event, what questions do you ask to figure out how they want the event to run in terms of theme, messaging, mood, etc.?
The most important question is: Who is going to be there? I want to know the demographics of the people who are attending. In the case of a corporate event, if it’s an industry, I want to know what sort of subspecialties within that industry are going to be in attendance. I also want to know what age and stage the majority of the people who are attending the event are. Is this an event for really seasoned professionals, like CEOs and executives and people who have been in it for 15 years? Or are there going to be newcomers as well? What all of these questions tell me is how I’m going to relate to the audience. They let me dig into what the audience is interested in, they let me know what news and current affairs may be of interest, and they tell me what kind of jokes I can use. It applies to language styles: if it’s a young crowd and just a young crowd, the style of language I use for emceeing is going to be different than if it’s an older or button-down corporate crowd.

What are your first steps after you accept a hosting gig?
Audience research. I’ll spend quite a lot of time doing that. Like I said, I want to know what’s going on in their industries, what’s going on in their subspecialties. If it’s an event in Edmonton, how is the Edmonton market affecting their industry? And it’s the same thing if it was Calgary. Regardless, I also want to know what the broader market is doing to them. Let’s go with the insurance example: is there something that’s affecting insurance providers across the province or across the county? I’ll also look at what current affairs are shaping their worldview and giving them things to talk about. A host or an emcee isn’t always necessarily coming from that group of people. I don’t know the first thing about insurance, but I need to sound like I do. That’s how you get people to warm up to you, and that’s how you’re able to guide them through an evening.

What are the final steps before you begin hosting and when you arrive at the venue?
I always check to make sure my schedule and agenda matches the organizer’s schedule and agenda. If someone has shown up late, I need to know that in case that means I have to shift who is appearing in what order in the program. And then I go into rehearsal mode. I go into the back, I find somewhere to hide and I rehearse the jokes, the important statements, and the timing over and over and over. If an emcee looks like they are doing things effortlessly and seamlessly, it is because they have rehearsed their stuff out the wazoo, even if they come with a big sheaf of notes. It’s normal for an emcee to use notes, but we still rehearse it.

What are some of your tips and tricks while you’re hosting to keep an event running smoothly and keeping the audience engaged with what you’re saying?
You want to make sure that the program and the schedule are tight and efficient. Audiences have incredibly short attention spans. We don’t want to be kept sitting and listing to things that aren’t interesting. I get the length of speeches down to the minute and usually down to the second. In order for me to ensure that the schedule remains tight, I need to make sure everyone who is taking part in the production knows exactly how long they have to speak. The other thing is that you want to make sure the material is relevant to the audience. Are you telling jokes they’re going to get? Because that makes them feel like they’re a part of the show—at all times, any event is about the audience. If you want to keep them engaged, you have to make it about them. If you’re able to call out specific members of the audience, that is absolutely great. If you know there’s going to be a couple of VIPs and you can give a light little roast, that gets everyone in on the joke and it tells the audience that you care about them, that you invested the time in learning about who they are and who’s going to be there. That increases engagement hugely.

How do you gauge how much humour to use or the seriousness of your tone during an event?
Almost all events are light in tone. But generally, you can gauge the seriousness of an event based off the program. Unless it is something like a memorial, it’s going to be light in tone and a good steady dose of humour is acceptable. In terms of how much humour and what kind of humour to use, usually the more button-down corporate the event is, the more restrained the humour should be. You still make jokes, but you make things more formal overall. If an event has a really specific agenda, your primary focus is to make sure that people are on task and on target—then you decrease the humour a little bit. But for the most part, I go for light. That being said, you always need to be respectful. People don’t like it when derogatory humour is used or when people are really being called out or put on the spot or made to feel uncomfortable or less than in any way. You want to make sure that people are being cast in their best light, even if you’re poking fun at them.

Can you give an example of a unique problem you encountered during an event, and the solution you came up with?
A good example is acoustics within a room. There are a few technical things that are good for a host to understand: how close you need your mouth to be to the microphone to be heard, and secondly is how a room’s acoustics and sightlines can affect certain people in an audience. In this specific case, I was hosting a business mixer at the Winspear Centre [in Edmonton] in the lovely open foyer. But there’s an intentional sound barrier in the room, where the ceiling drops down and you can’t hear a thing beyond the host area. I noticed that people weren’t stepping up and paying attention when I was giving out a call for attention: “Excuse me, ladies and gentlemen, I’ve got a great announcement: we’ve got prizes!” If no one pokes their head around as soon as you mention prizes, you know they can’t hear you. As soon as I noticed that, I grabbed the event organizers and got them to ask people who were in the atrium to move forward into the main area of the room, to basically act as sheepdogs and herd everyone in the area so they could hear me. We got the majority of the people to get where I needed them to be and we were able to work the audience that way. And I then let them know, “Okay, you can go back to your mixing, but in about 15 minutes, we’re going to start the speaker panel, so come back when you see me come up on stage.” It’s being aware of your surroundings and being able to think on your feet of how can I deal with it in a way that’s practical and easy. But recognize that you’re never going to have a 100% fix on a problem and you’re just looking for good enough, as long as it gets you through the night.

Are there any ways that you’re integrating new technologies into your duties?
I usually go for a Luddite approach when hosting an event because the more tech you include the more likely it is to go wrong. That being said, there are things that are really fun to incorporate. If I have the chance to play around with a slideshow, I enjoy doing that. It depends on the audience—if it’s a corporate audience, usually slideshow humour goes over remarkably well. Videos are very popular right now to incorporate into events. So the emcee will say a few words, and then they’ll show a video of one of the VIP companies in attendance or someone who is presenting an award. Those are great because they break up the flow of the program and it jolts people into a different mode of thinking. By the same token, it’s easily overused. Videos need to be short: thirty seconds, one minute max if it’s a really good video. Like I said, I like to go as low-tech as possible. I have my notes on paper; I don’t cue off of anything else.

What’s your best piece of advice for someone hosting an event?
I’m going to sound like a broken record, but I’ll say it again: whatever you say, make it relevant to the audience. It’s about them, it’s not about you. And that can be hard, especially if you’re not intimately familiar with the audience—that’s why all the research needs to be done about the audience. You’ve done a good job if you are almost like wallpaper. If you can swap out the emcee for someone completely different, deliver the same stuff, and have people enjoy it just as much, then you’ve done a brilliant job. Then that makes sure that it’s been about the audience the whole way through.